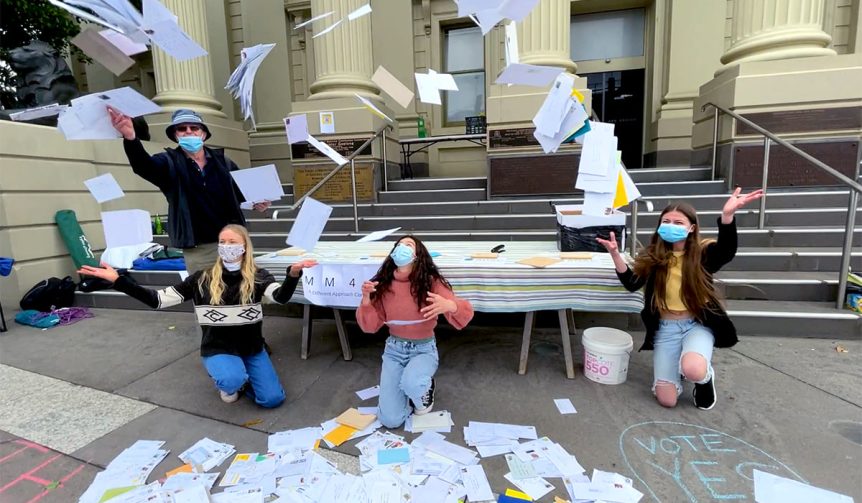 A Different Approach Community - ADAC started in 2019 as a grassroots organisation with members who are passionate about the need for climate action.

Since December 2019, with members support, we have mailed out 227 letters per month to all 227 federal parliamentarians asking for urgent action on climate change.

In October 2021, 3,850 letters had been mailed as our effort towards an ever growing number of climate groups all asking for the same action, to stop the climate train crash coming our way.

ADAC sent this letter to the 227 parliamentarians in September 2021.

With help from many other climate groups, ADAC led the Mass Mailout for Climate (MM4C) campaign in 2021 in support of Zali Steggall’s Climate Change Bill.

This bill was to be introduced to the parliament in March 2020, but because of Covid-19 the vote on the bill was postponed.

During the Covid-19 lockdown, the ADAC group’s efforts had also been slowed. However, we continued to mail the monthly letter to all 227 federal parliamentarians asking for action to reduce greenhouse gases.

Mass Mailout for Climate (MM4C) )continued to grow following a meeting with Zali Steggall and her Canberra-team of five, on the 15th June 2021. What caught Zali’s eye was the prospect of a very large number of letters already coming from this grassroots climate group.

This campaign had 34 networkers contacting 254 climate groups across Australia. These climate groups had well over 850,000 members and supporters who potentially could have sent an enormous number of individual letters to Canberra as a Plea for Climate Action.

NO TIME TO LOSE

What our world will be like for humans living in the centuries after the fossil fuel age depends on how quickly we make the transition to a carbon-neutral society.

The longer the transition takes, the higher the global temperatures will be - with serious effects on the habitability of our cities and towns, on human health and on the survival chances of many species of plants and animals.

The longer the transition takes, the higher the sea levels will be - with serious effects on the viability of harbour-side cities, on the survival of island communities in the Pacific and Indian Oceans, and on the food producing capacities of Earth’s low lying deltas and flood plains.

The longer the transition takes, the greater the frequency of catastrophic weather events, resulting in storm and flood destruction of infrastructure and buildings, in bushfires that destroy towns, forests and farmlands, in massive costs of insurance and restoration and in the traumatic loss of human life.

The longer the transition takes, the greater the risk of international tensions involving trade wars, access to food and water resources, famine and starvation.